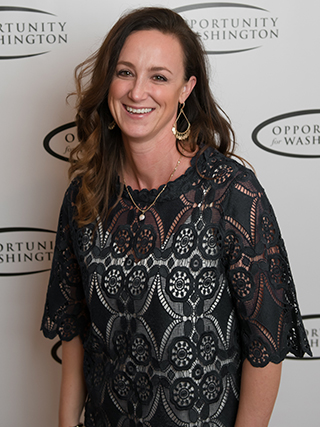 For Jessica, everyone deserves a life where they can thrive as individuals and have the opportunity to better themselves and their family.

She will always continue being the simple girl that will take off her shoes to give it to a working woman that’s shoeless, as she once did in her travels, and the formidable leader that will stand up for those that have not had the same opportunity to do so for themselves.

Jessica Garcia is becoming an icon of common sense in Washington State leadership. She was born in Downers Grove, IL and emigrated to the state of Washington with her parents settling in beautiful Ellensburg when she was very young. Ellensburg became her childhood home, and she is a proud graduate of Ellensburg High School.

Jessica found herself a single mother at the age of 19 and became resilient to work multiple jobs to sustain herself and her son, while pursuing her love for the medical profession. She rapidly became a phlebotomist and soon after finished her nursing degree. Jessica gained the respect and admiration of many for her leadership as a trauma nurse of 15 years, charge nurse, and nursing supervisor. Her passion to be a true member of this altruistic profession led her to have the unique qualification of being a Sexual Assault Nurse Examiner, helping women in their worst times.

Jessica Garcia expanded her career and pursued rewarding paths in the human behavioral fields. She is truly committed to the development of women leaders and has served as chief of staff of leadership and self-improvement seminars. Jessica has a persistent desire to improve herself and others in this arena. She is presently in a leadership Mastermind called Living as a Leader, by Convergency Systems, a leading leadership company in the United States, to further develop her leadership skills.

Mrs. Garcia owns her own medical practice with her husband of which she is the Director of Business Development and Manager. Her employees, patients, and colleagues have complete admiration for her approachable, and efficient leadership. Mrs. Garcia also serves on the Safe Yakima Board of Directors, an organization that directly supports solutions to solve our overwhelming child and teenage drug addiction in Yakima County.

There are many opportunities in the medical and business leadership world for Jessica Garcia, but she is lovingly and peacefully satisfied to dedicate as much of her precious time to her family.

Jessica Garcia is today a mother of five wonderful children, a super amiable dog named Pongo, and a super entitled cat named June. She will always place her children and family first and enjoys the title of super mom, as her family lovingly calls her. She considers this the most special and meaningful aspect of her life.

In 2020, Mrs. Garcia jumped into a world that was new to her and truthfully, one that she had never had any interest in being a part of, politics. Jessica’s loving husband and now a brand along with her in Washington State, Dr. Raul Garcia, commenced his aspirations as a public servant and ran for the office of Governor. This, Mrs. Garcia would say changed their lives forever in the most eye-opening way imaginable.

The experience that she endured next to her husband during their campaign was one of the most rewarding experiences of their lives – even though they fell short in the primary elections. “There are so many people wanting WAshington to run at its full potential. There’s so much good to be accomplished and I want to be a part of that,” Jessica Garcia says and remains a tower of strength for common sense, positive improvement, and better well-being of the people. Jessica and her husband formed a 501c4 non-for-profit organization to highlight, support, educate, and promote, positive change in Washington state.